Let us begin with general information...

The School's premises, since 2001, is the Palace of Culture and Science, located in the heart of the city, on the junction of two main city's arteries: Marszalkowska and Aleje Jerozolimskie, just next to the Central Railway Station and the underground station, tram stops and bus garages, in a close proximity to the Old Town and the King's High Road: Krakowskie Przedmiescie, Nowy Swiat and Aleje Ujazdowskie. 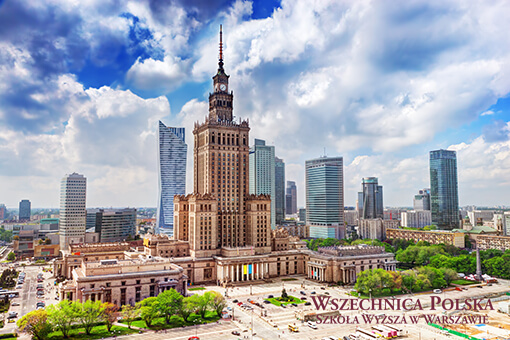 Inside the Palace there are numerous cultural and scientific institutions: theatres, cinemas, museums, branches of Polish Sciences Academy, concert halls, a swimming pool and educational-artistic institutions, presenting a rich offer that fills free time of children and young people. Restaurants, cafés, clubs and bars, together with a large parking lot around the Palace, create good conditions that enable to stop, eat a meal and have a rest.

The following are the most important facilities in the Palace:

More information can be found on the Palace’s website.

Wszechnica Polska, that is the VIII and X floor of the Palace of Culture and Science, can be reached most conveniently with use of a lift. Modern, fast, adapted for use by the handicapped - the lifts provide comfortable transport.